Let’s set up a show at your school 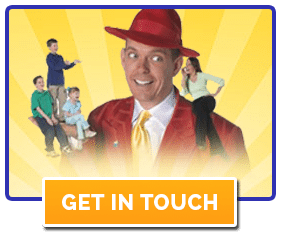 12 Shows to choose from: 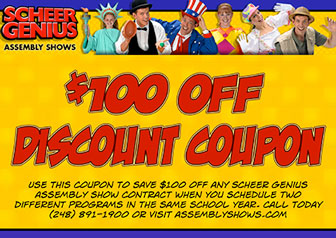 My school has had Doug Scheer as a regular for years. The staff and kids love to watch him perform and the messages from his various programs are tailored for maximum enjoyment and impact. I would recommend him to anyone interested in a program that is engaging and fun for all.

Doug Scheer has given thousands of Southgate students the joy of assembly shows over the last 10 years. He constantly refines his assembly shows to be engaging, thought provoking, and relevant. The students always ask, “when is that assembly guy coming back”? Staff are equally enthusiastic about his return. He could rename his act as “Scheer Enjoyment”!

Get in touch TODAY

Are you looking for a great live school assembly show or perfect virtual assemblies?

Get the best assembly program for your Elementary School

When you’re in charge of someone else’s money, spending it on assemblies is very stressful. School shows that are just “okay” are really a waste of everyone’s time. Classroom instruction time is precious and your teachers can’t afford to throw it away. So don’t. Demand the best for your students and school when it comes to live elementary and middle school assemblies and on-line assemblies.

I had four teachers get out of their seats during your assembly show and come up to me to tell me how fabulous you are. They couldn’t wait to tell me that your show is the best they’ve ever seen. That never happens. Three more teachers told me similar things on the way out the door. Thank you for making my job easy. Next year won’t come soon enough. The teachers can’t wait to have you back!

Doug Scheer is widely considered one of the best school show performers in the country. And he has taken the lead in providing live assemblies and virtual assemblies across the nation for learn at home students.

When I was just a boy, dreaming of being a performer, my dad gave me this advice,

“If you want to be successful, do one thing.

Then do it better than anyone else.”

That was over 35 years ago but it has been my driving force as I worked to establish my reputation in the educational school show assembly market. Then my family had a life-changing event. Our son was diagnosed with autism.  My desire for my boy to be accepted by others, have friends, and learn proper social skills changed the focus of my career.  I channeled this fear and my creative energy into adding a new series of character school shows to the growing lineup of curriculum-based assemblies which already included school shows on science, math, history, and reading. Those new character education assembly programs not only encourage children to accept others with differences, but also teach them how to get along, resolve conflicts with leadership skills, and bully-proof their schools.

There are a small handful of school shows that stand out from all the rest. Doug’s shows are on the top of that list. That’s why I’ve hired him every year for the past 18 years.

As your students are filing into the assembly show listen to all the, “wow”, “cool”, and “awesome” exclamations from the kids. An assembly show that is just a lecture is fine for adults and high school kids, but elementary students need to be drawn in immediately. Incredibly colorful sets and backdrops set the stage for all of these elementary assembly shows. Beautiful graphics, funny props, and upbeat music are just the beginning.

Over $250,000 has been invested in this series of educational school shows, from incredible props and illusions designed by the same creative minds that have worked for Ringling Brothers, Disney, and Broadway productions, to professional staging from a former choreographer and director who worked with David Copperfield for nearly two decades.

The first thing you’ll notice: the students become the stars.

When you’re in the audience you can just sit back and enjoy.  When it comes to assemblies, I know what I’m doing. Learning is best when it’s hands-on, so audience participation is a key element in every minute of every live and even virtual assembly show. No one is ever embarrassed while assisting and the teachers can relax too –they won’t be called up on stage. The focus is always on the most willing participants, the kids!

Guaranteed means if my assembly shows don’t live up to all of these promises, then you don’t pay.

The AssemblyShows.com pledge is to provide the best live show learning experience possible. Just provide a supervised and respectful audience, then rest assured everyone will enjoy a guaranteed-great show. Guaranteed means if my shows don’t live up to all of these promises, then you don’t pay. It’s that simple. We’ve made that pledge for over 35 years and have never had to refund a single dime. Contact us now and join our list of repeat school show clients then be confident in knowing you’ve found the best elementary school and middle school assembly shows at great prices!

We’re in a position to hire the best acts from around the country and we’ve seen dozens upon dozens of shows…some internationally known.  Doug’s performances for our families drew more compliments from the parents than we’ve ever had before. You can only imagine how thrilled we were to get that kind of feedback.

The AssemblyShows.com program line up of educational assemblies and live-action assembly shows for elementary schools was slowly created over many years. Today, I am widely recognized as one of the leading school show / educational performers in the nation. To date, hundreds of thousands of elementary and middle school students have participated on stage in my school shows and millions of others watch my educational comedy routines on various television shows around the world and on my AssemblyShows YouTube Channel. And if I look familiar that’s because I was cast as the Belle Tire TV Magician for two seasons with over 1200 showings of a 30-second commercial.

I am the author of four books, Diversity Circus; Entertaining Education, A Comprehensive Guide to Creating and Performing Educational Magic; Scripts & Clips, Routines for School Show Performers; and the newly released, Punctuation Pandemonium.

Diversity Circus is also a 45 minute DVD of one of our most popular character assembly shows featuring the message of Dr. Martin Luther King Jr. It’s now available worldwide on Amazon.  In my spare time, I publish articles on using entertainment to instruct and that’s lead to being widely called upon as a speaker with a focus on using special needs children as audience volunteers.

I lecture to some of the top school performers sharing advice on how to best include kids on the autism spectrum in order to model acceptance and compassion.  My colleagues have seen me at national conventions including KIDabra in TN, Magic Live in Las Vegas, and at the combined IBM/SAM convention in St Louis, drawing over 800 colleagues to my standing room only lecture.

While primary and upper elementary school show presentations have been my main passion of the past 30 years, I am fortunate enough to have signed many long term appearance contracts with some big companies like Dow Chemical, Executive Energy, and DTE. I also spent 18 years touring with a customized educational special effect and magic show for Chevrolet. Plus you’ll see my shows on the road around the world. I created the wildly successful school show, The Wacky Science Show, with franchises in eighteen states, Canada, Israel, France, and Spain.

My travels take me to all 50 states as well as Puerto Rico, Canada, and Israel. With all this experience my funny presentations have made me one of the most in-demand assembly show educators in the U.S. In 2016, I was named, one of the “Best Children’s Magician’s in the World” in conjunction with a special appearance at the famed Magic Castle in Hollywood CA. That was cool.

I schedule most of my assembly performances directly through this website but I am also one of the most requested performers for two of the top school show booking agencies in the country. So don’t be confused. Be sure to contact me directly for my best rate. My next school show performance can be my greatest yet when you invite me to bring my educational school shows to your elementary school.


Let’s set up a show at your school

12 Shows to choose from:

My school has had Doug Scheer as a regular for years. The staff and kids love to watch him perform and the messages from his various programs are tailored for maximum enjoyment and impact. I would recommend him to anyone interested in a program that is engaging and fun for all.

Doug Scheer has given thousands of Southgate students the joy of assembly shows over the last 10 years. He constantly refines his assembly shows to be engaging, thought provoking, and relevant. The students always ask, “when is that assembly guy coming back”? Staff are equally enthusiastic about his return. He could rename his act as “Scheer Enjoyment”!

Get in touch TODAY